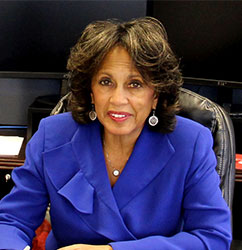 As a reviewer, she contributed to the groundbreaking Institute of Medicine (IOM) report, "The Future of Nursing: Leading Change, Advancing Health," and served on the Minority Health Federal Advisory Committee, a federal panel established to advise the US Secretary of Health and Human Services. Dr. Malone has been awarded more than 20 honorary doctorates. Presently, Dr. Malone serves as Vice Chair at the Institute for Healthcare Improvement (IHI) Board of Directors, Co-Leads the National Academy of Medicine (NAM) Health Professional Education and Communication Working Group, as well as serves on NAM’s Steering Committee. She is a member of ecoAmerica’s Leadership Circle Executive Committee.

In 2022, Dr. Malone was listed in Modern Healthcare’s 100 Most Influential People – for the third consecutive year (2020, 2021, 2022). She was honored by the American Nurses Association with the prestigious President's Award, selected for the M. Louise Fitzpatrick Award for Transformative Leadership by Villanova University, and named one of the 50 Most Influential Clinical Executives by Modern Healthcare. She was featured as one of 25 Outstanding Women for Women’s History Month by Diverse: Issues in Higher Education. Additionally, Dr. Malone was honored as part of the 2022 STATUS List, the most definitive accounting of leaders and influencers in the life sciences, as well as one of 12 Influential Persons in Health, Science and Innovation by Morehouse School of Medicine. And, she was included on HealthTech's list of 30 Healthcare IT Influencers Worth a Follow in 2022.

Similarly, in 2020 Dr. Malone was ranked No. 5 in Modern Healthcare’s Top 100 Most Influential People, received the University of Cincinnati’s Linda Bates Parker Legend Award, named an Honorary Member of the Philippine Nurses Association of America and presented with a special award of distinction by the NLN Board of Governors. Becker's Hospital Review named her as one of 70 African American Leaders in Healthcare to Know. Also, she was bestowed the Gail L. Warden Leadership Excellence Award by the National Center for Healthcare Leadership and conferred by the American Academy of Nursing with their Highest Nursing Honor, “Living Legend.”

The Alpha Omega Chapter of Sigma Theta Tau and the College of Nursing of Adelphi University, Long Island honored Dr. Malone with the Lifetime Achievement Award in 2019. She was presented with a citation from the American Psychological Association for her outstanding leadership in advancing excellence in healthcare for the nation and global community, was named one of the Top 25 Minority Executives in Healthcare by Modern Healthcare magazine and accepted the Nursing Outlook Excellence in Research Award in 2018.

Dr. Malone has earned additional accolades, including the Florence Nightingale Award and induction into the Home Care & Hospice (NAHC) Hall of Fame and the Nursing Hall of Fame from Tuskegee University in Alabama. She also received the Fellowship Ad Eundem of the Faculty of Nursing & Midwifery from the Royal College of Surgeons, Ireland. Dr. Malone has received more than 20 honorary doctorates – both domestically and abroad – including from Georgetown University.

Dr. Malone first entered the field of nursing with a bachelor's degree from the University of Cincinnati. She combined the pursuit of lifelong learning with clinical practice, earning a master's in psychiatric nursing, and later a doctorate in clinical psychology. Dr. Malone has worked as a surgical staff nurse, clinical nurse specialist, director of nursing, assistant administrator of nursing and in the 1980s, she was named dean of the School of Nursing at North Carolina Agricultural and Technical State University. In 1996, she was elected to two terms as president of the American Nurses Association (ANA) representing 180,000 nurses in the US.

Dr. Malone served as deputy assistant secretary for health within the US Department of Health and Human Services under President Bill Clinton and earlier as a member of his Advisory Commission on Consumer Protection and Quality in the Healthcare Industry. She is frequently called on by congressional leaders and policymakers to offer her subject matter expertise and testimony on increasing support for nurse workforce development and education for nurse educators to address the persistent shortage of nurses, which threatens health care delivery across the United States – from inner cities to suburbs to rural communities.

A global leader as well, Dr. Malone served as general secretary of the Royal College of Nursing with a membership of 400,00 nurses, the United Kingdom's largest professional union of nurses. She leveraged her experience and influence in that position to serve as a member of the UK delegation to the World Health Assembly; the Commonwealth Nurses Federation (CNF); and the Higher Education Funding Council for England (HEFCE). During that time, Dr. Malone was also vice chair of the Brussels-based European Federation of Nurses Association (EFN). Furthermore, she has the distinguished honor of her portrait being displayed at the National Portrait Gallery in London.